The "Amics del Campament dels Soldats" Association is a newly formed group of mallorcan citizens that aims to preserve and study the material remains of the “Campament dels Soldats”. By this name (meaning Soldier's Camp) a set of architectural structures, which are in an advanced state of degradation, is known.
About 750 men, prisoners of the Franco's dictatorship, were confined to this camp from 1941 to 1943. They were mainly defeated soldiers from the Spanish republican army in the Spanish Civil War (1936-39), but also some civilians, punished for their ideas, were housed there too. Prisoners were forced to construct a road (still unfinished) which had to lead to a cape where it was expected to install artillery batteries. Following that sad period, from 1943 to 1948, a small detachment of soldiers from the Spanish army occupied the site until being abandoned.
The "Campament dels Soldats" is located in the “Parc Natural de la Península de Llevant” (Artà, Mallorca). Its location in a preserved land may have prevented its irreparable loss; however the Camp has not been saved from multiple erosions. The most recent of which were cows housed in the grounds of the Camp.
As a result of our concern about the state of the Camp remains and in order to honor the memory of those who suffered in it, our association was constituted in March 2011. Welcome everyone who wants to share our aims.
Publicat per Associació d'Amics del Campament dels Soldats a 12:53 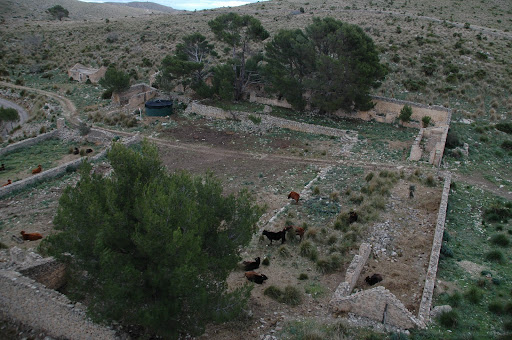